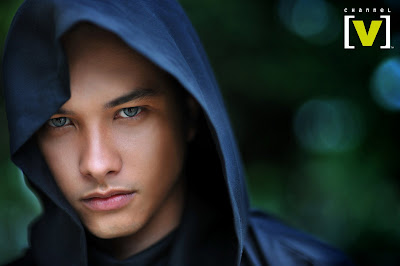 From Friday, 19 Dec, fans can log onto www.channelv.com/nidji to be among the first to watch Nidji’s effects-laden, action-packed clip.

Directed by Sim F, one of Indonesia’s most sought-after commercial directors, the ‘Shadows’ video features the six Nidji bandmates squaring off against a hooded villain, played by CHANNEL [V] VJ Nicholas Saputra.

Nidji fans who log on to the CHANNEL [V] website will also find a behind-the-scenes photo gallery and an exclusive making-of video. As a special treat, [V] is also giving away a Gibson Flying V Electric Guitar signed by Nidji. To be in the running to win this one-off prize, fans should log on to www.channelv.com/nidji and enter before Dec 31.

Since ‘Shadows’ accompanies the on-air promotions for the all-new third season of Heroes on STAR WORLD, the video has a Heroes-inspired vibe. As well as Nicholas’s Sylar-like villain, the clip also features Nidji as super-powered warriors.

“The biggest challenge was to make the fight scenes look real because we’re not action-movie stars,” notes Nidji drummer Adri. “But they had a professional stuntman on set so I’m looking forward to seeing how our kick-ass fight scenes turned out.”

In Indonesia, Nidji continues to top the charts and win new fans. Last month, the band drew over 1,000 fans to Jakarta’s Hard Rock Café where they performed songs from their debut album, Breakthru’, and the follow-up release, Top Up, including ‘Shadows’, ‘Arti Sahabat’, ‘Biarlah’, ‘Hapus Aku’ and ‘Heaven’.

Hosted by Meira Anastasia and CHANNEL [V] VJ Nicholas Saputra, the show was recorded for a [V] Special airing exclusively on Sunday, 7 Dec at 6pm WIB.

Nidji sheds light on ‘Shadows’ on Friday, 19 Dec by premiering its all-new video exclusively on CHANNEL [V]’s website. Fans can log onto www.channelv.com/nidji to catch this epic clip and be in the running to win a Gibson Flying V Electric Guitar signed by Nidji.